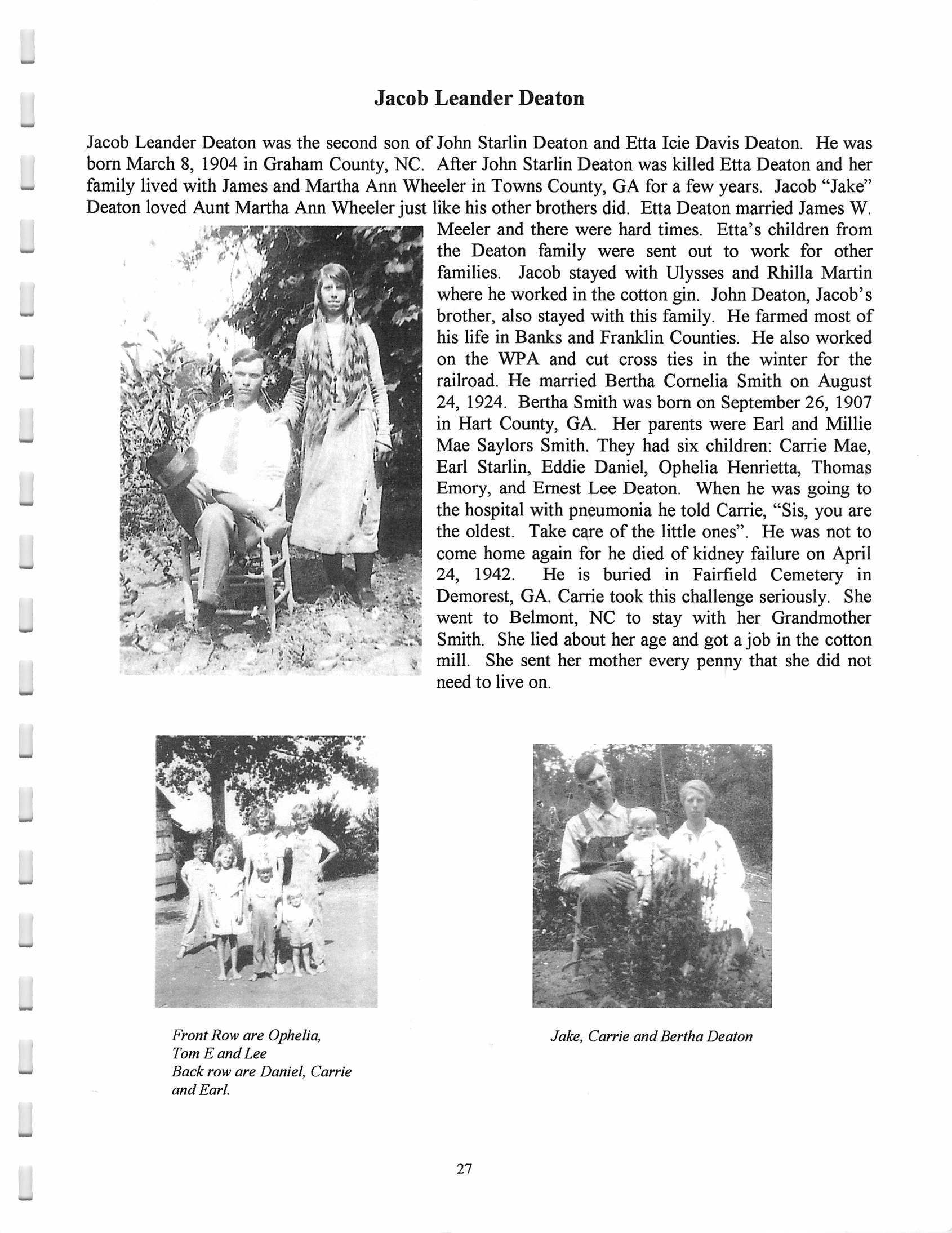 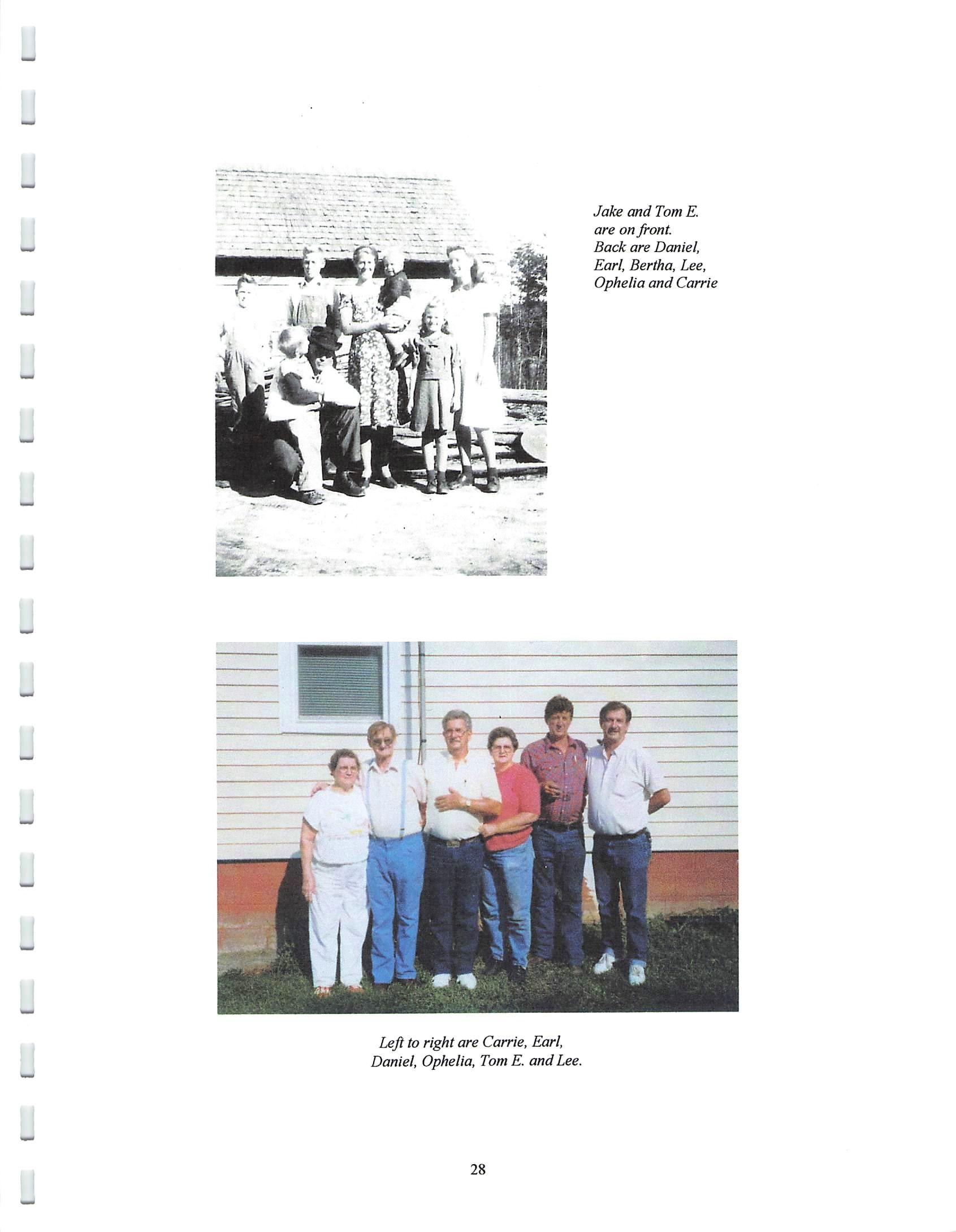 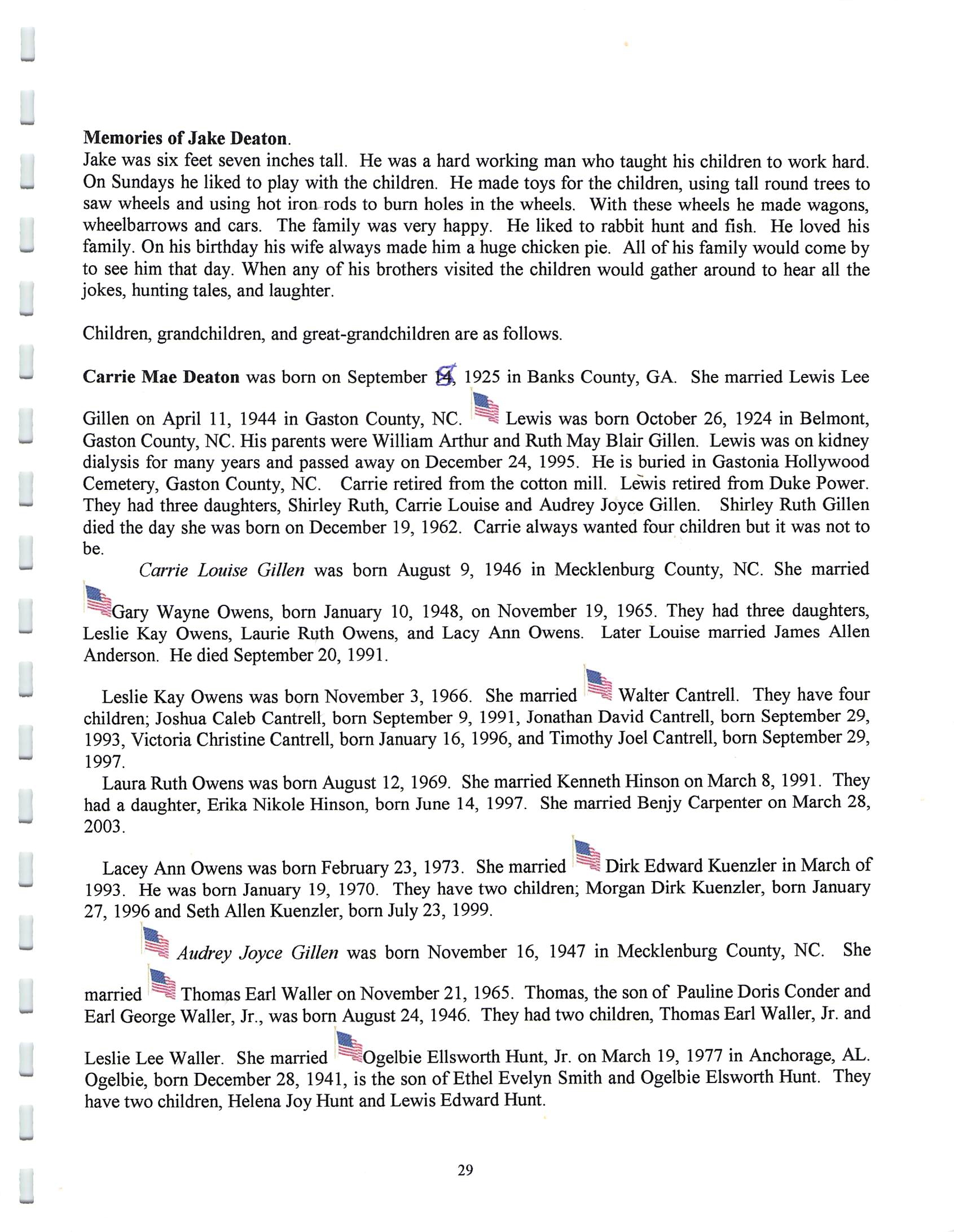 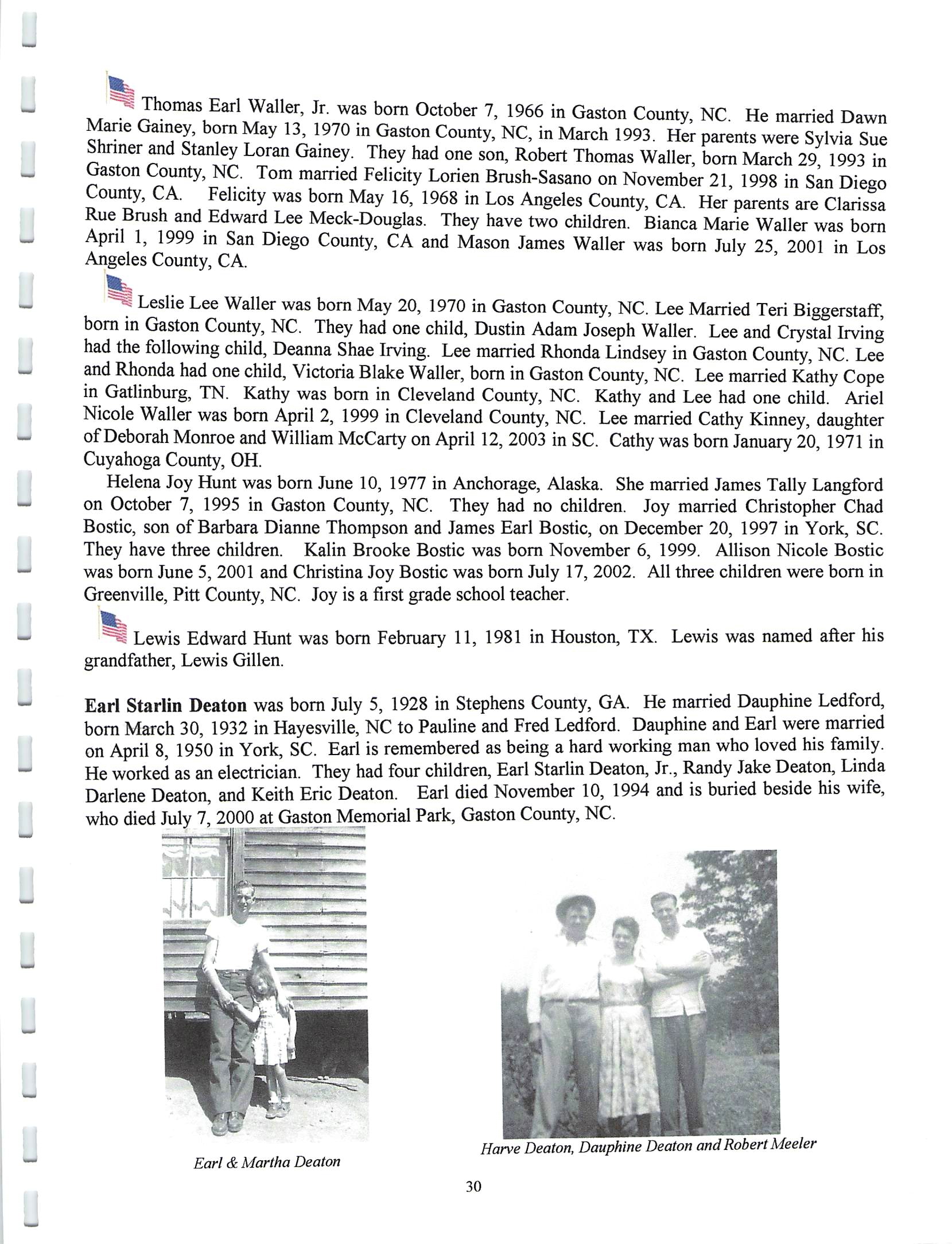 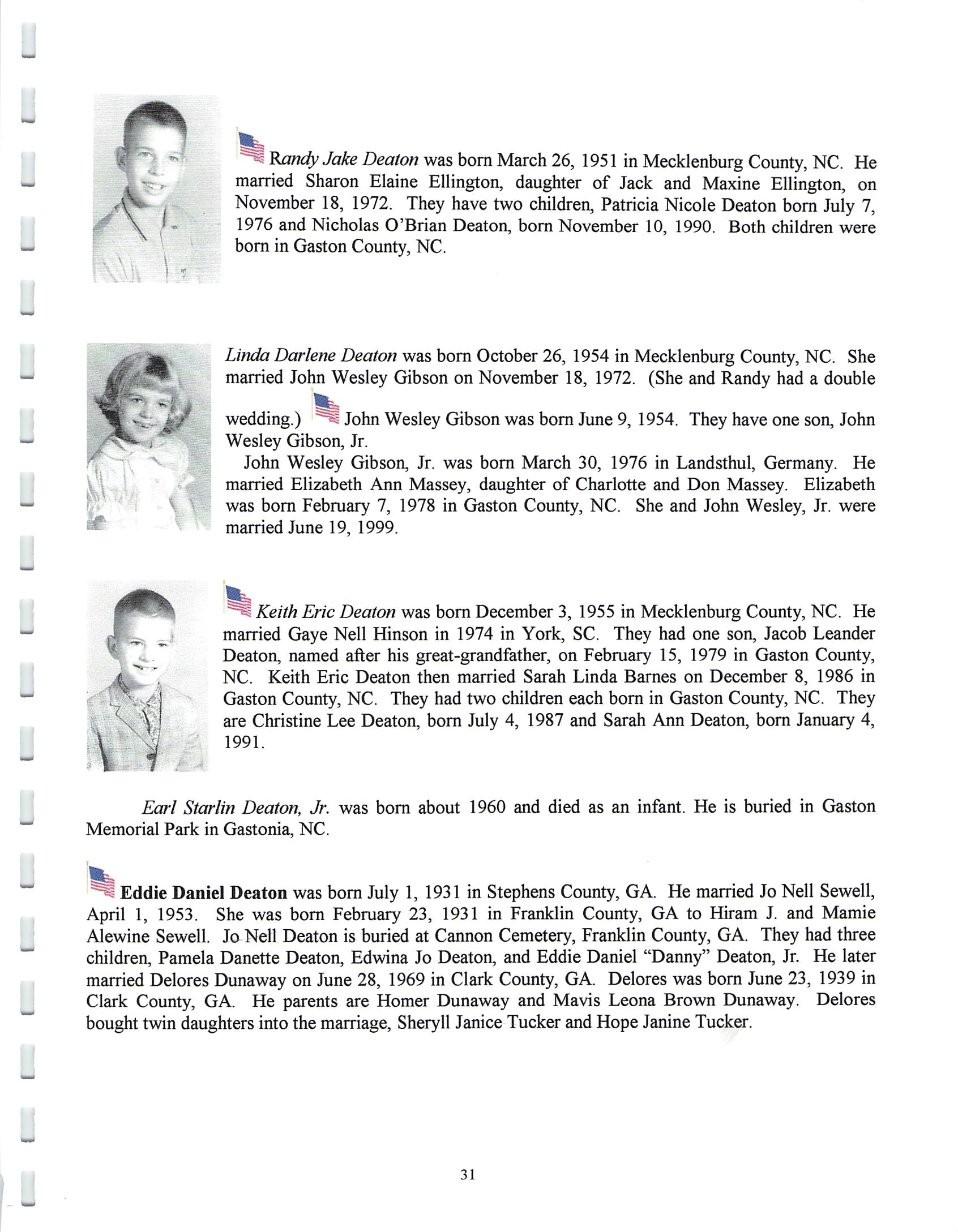 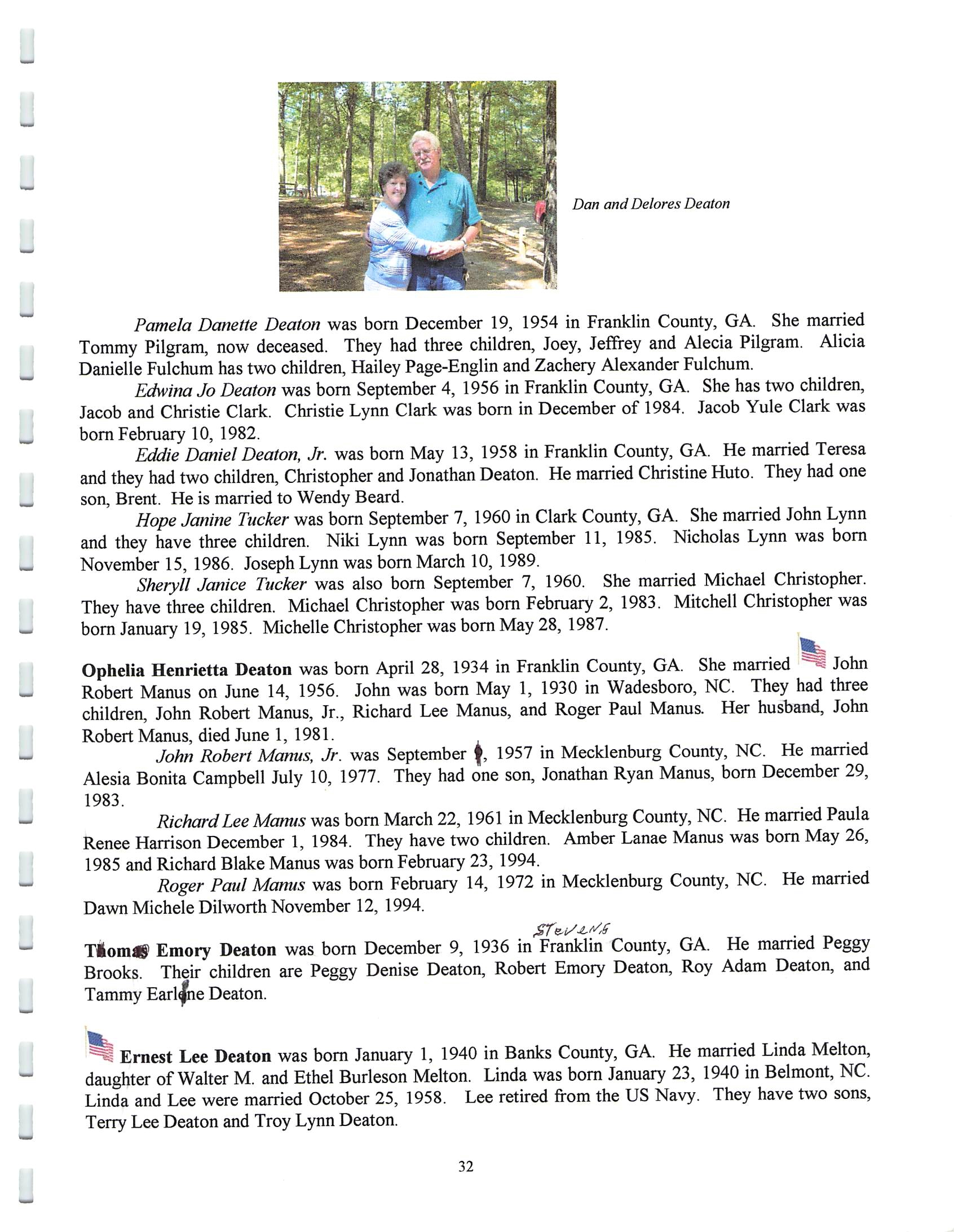 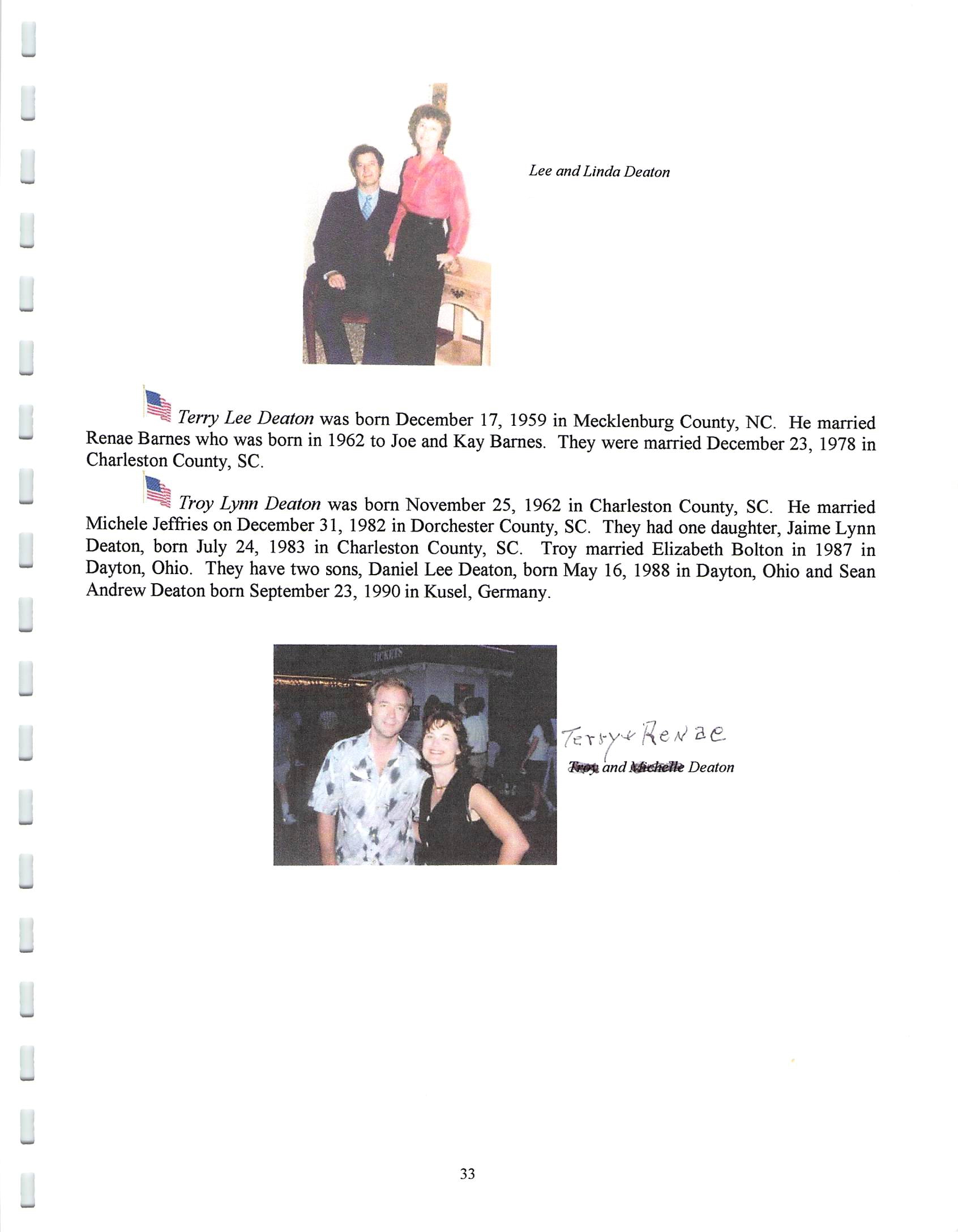 The last page of Jacob Leander Deaton's lineage had the wrong name associated with Jacob's grandchildren, Terry and Troy Deaton.

Terry Lee Deaton was born December 17, 1959 in Mecklenberg County, NC. He married Renae Christine Barnes who was born in 1961 to Robert Earl and Carolyn Kay Barnes. They were married December 23, 1978 in Dorchester County, SC. He later enlisted in the US Army and served six years with the 1-118th Infantry Regiment in Summerville SC. 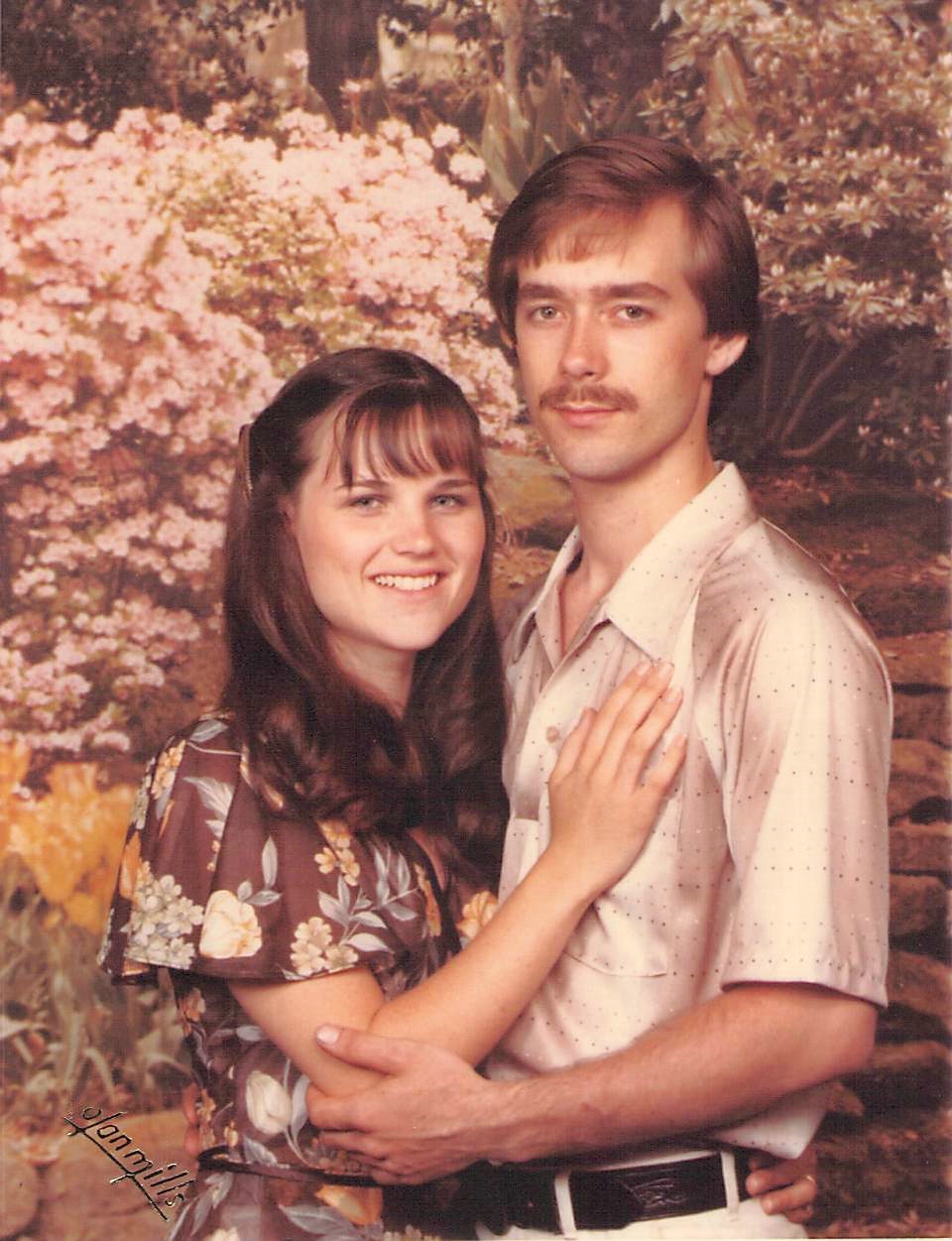 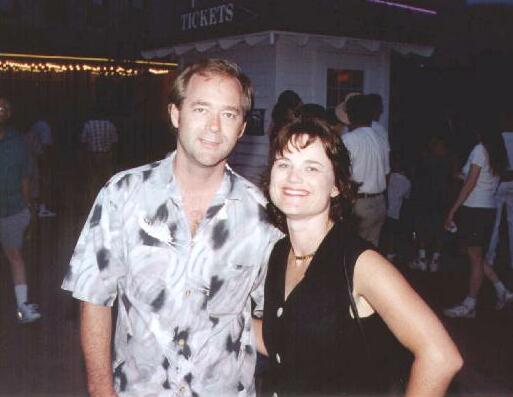 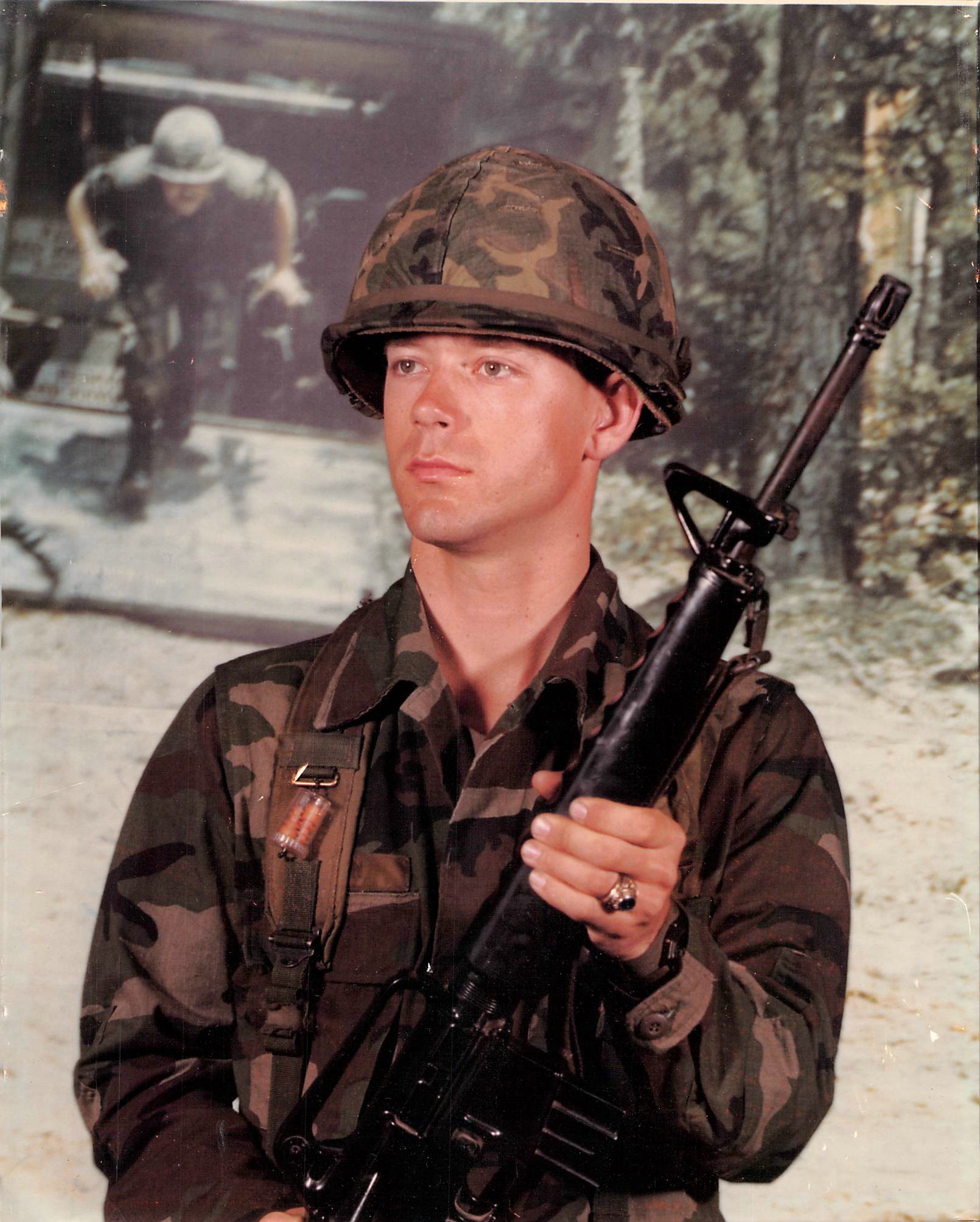 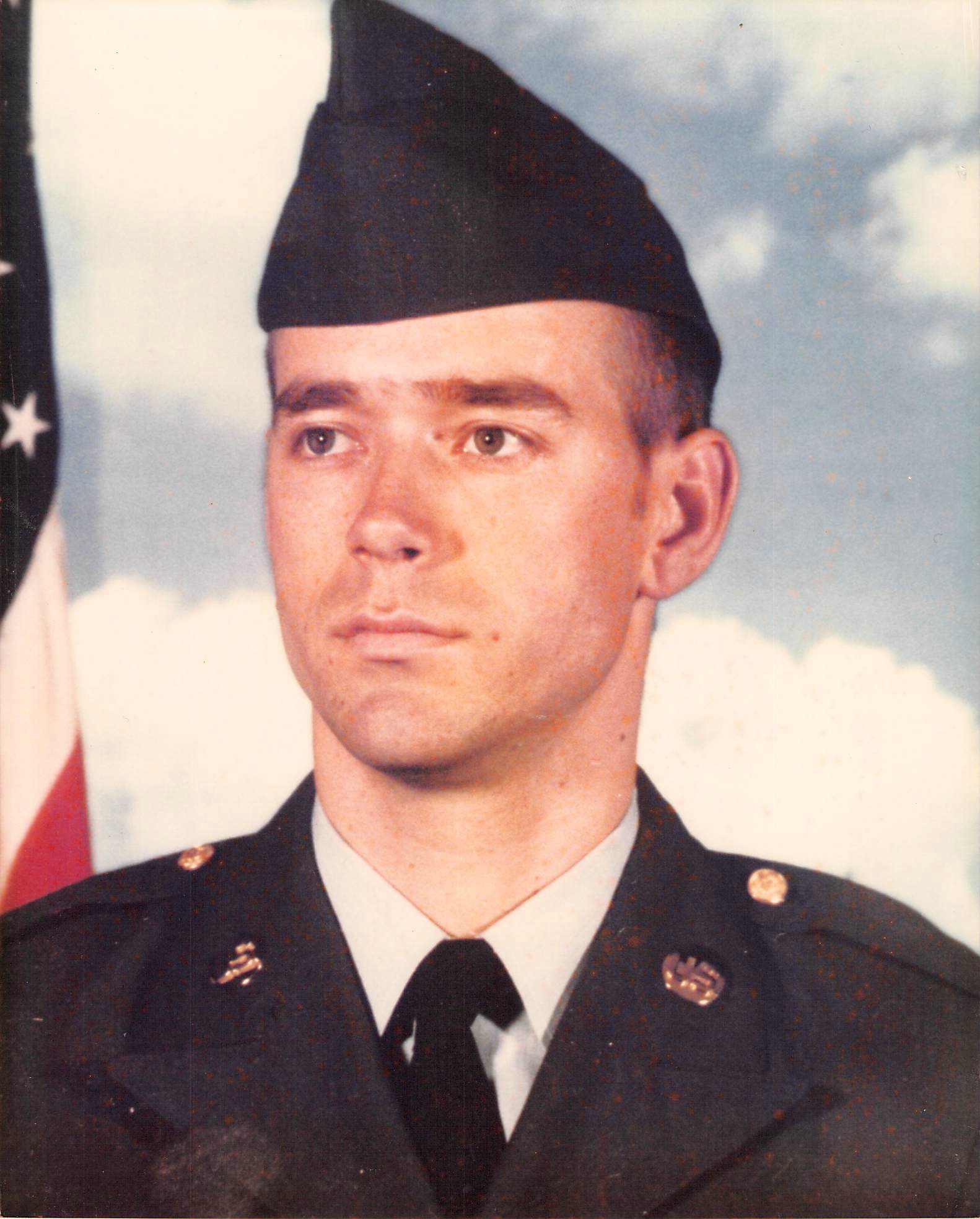 Troy Lynn Deaton was born November 25, 1962 in Charleston County, SC. He later enlisted in the US Army and served three years with the 1-118th Infantry Regiment in Summerville SC. He married Michelle Denise Jeffries who was born in 1965 to Chuck and Martha Jeffries. They were married December 31, 1982 in Dorchester County, SC. They had one daughter, Jaime Lynn Deaton, born July 24, 1983 in Charleston County, SC. Troy separated from the US Army and enlisted in the US Air Force in 1984. He was divorced in 1985. Troy married Elizabeth Johannah Bolton who was born in 1965 to James Joseph and Shirley Jean (Heitz) Bolton. They married in 1987 at Wright-Patterson AFB, Dayton Ohio. They have two sons, Daniel Lee Deaton, born May 16, 1988 and Sean Andrew Deaton, born September 23, 1990 in Kusel, Germany. Troy served 20 years and retired in 2004. 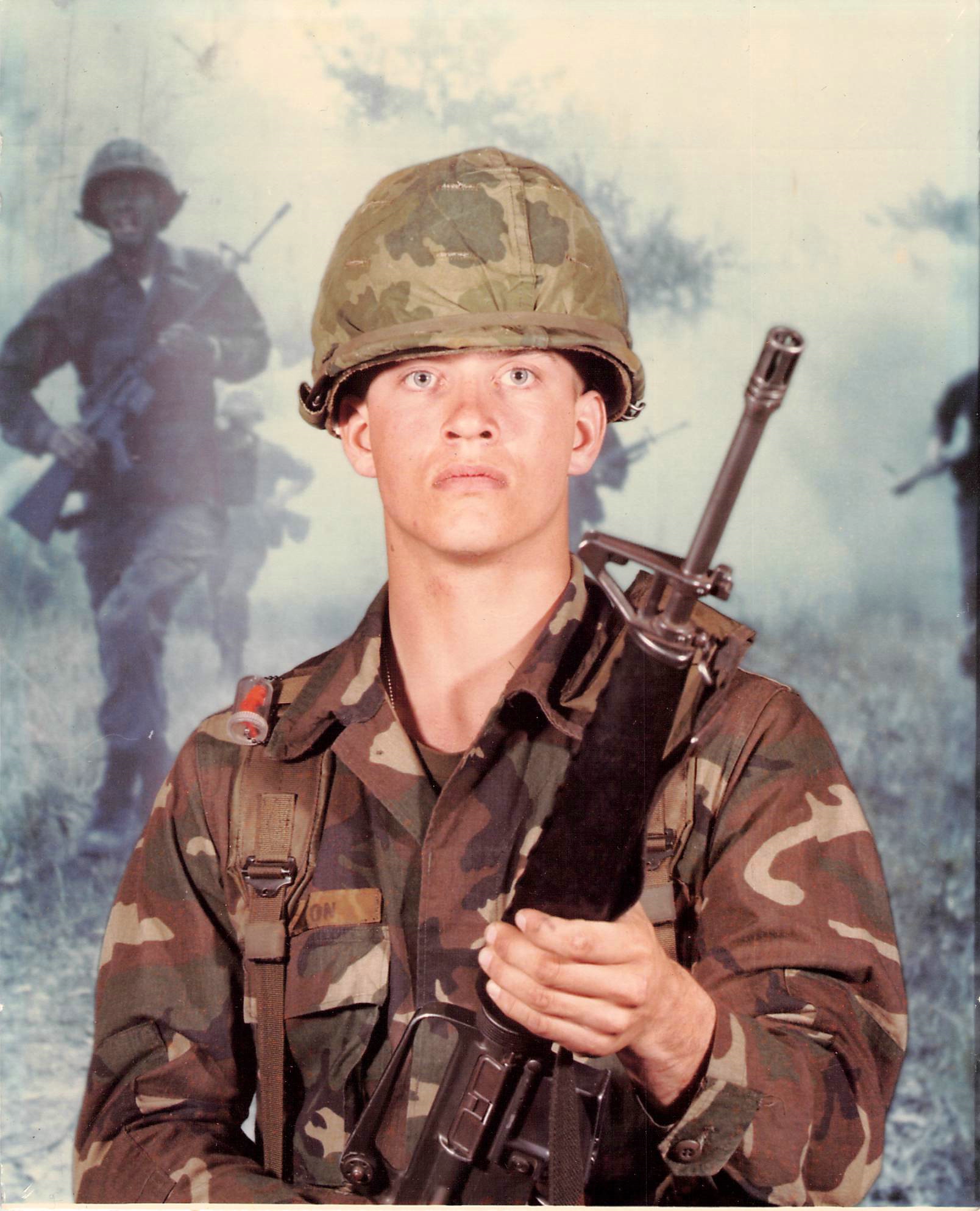 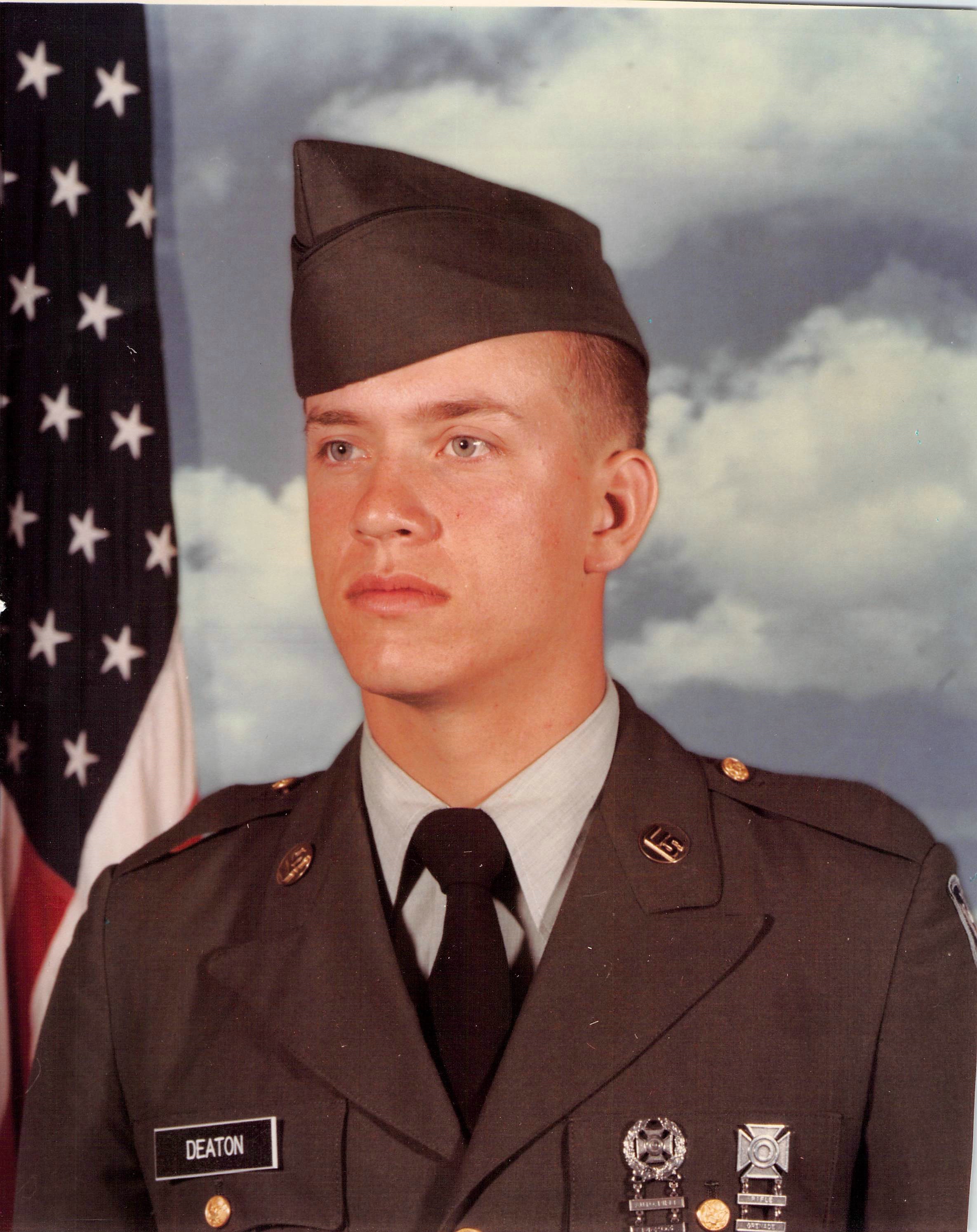 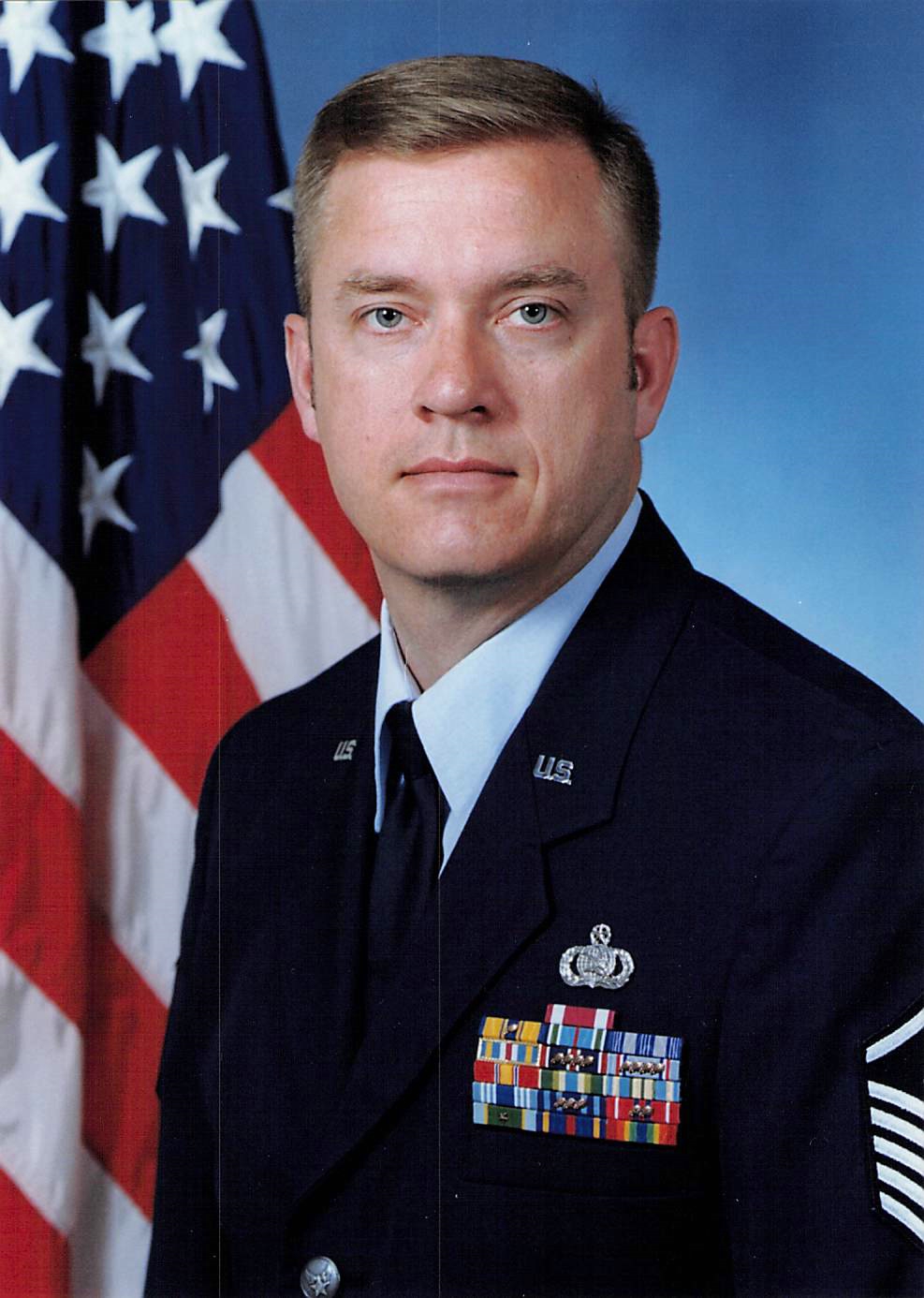 Re: Jacob "Jake" Leander Deaton from the Deaton Family Book

Sean Andrew Deaton was born September 23, 1990 in Kusel, Germany. He married Michaela Marie Keeley, who was born in 1996 to Thomas Francis Keeley and Gloria Jeanne (Lowry) Keeley. They were married December 14, 2018 in Virginia Beach, Virginia. Sean enlisted in the US Navy and served 9 years at Norfolk Naval Base and Oceana Naval Air Station. Sean and Michaela currently reside in San Diego, California and continue to serve in the US Navy.
Top
Post Reply
3 posts • Page 1 of 1